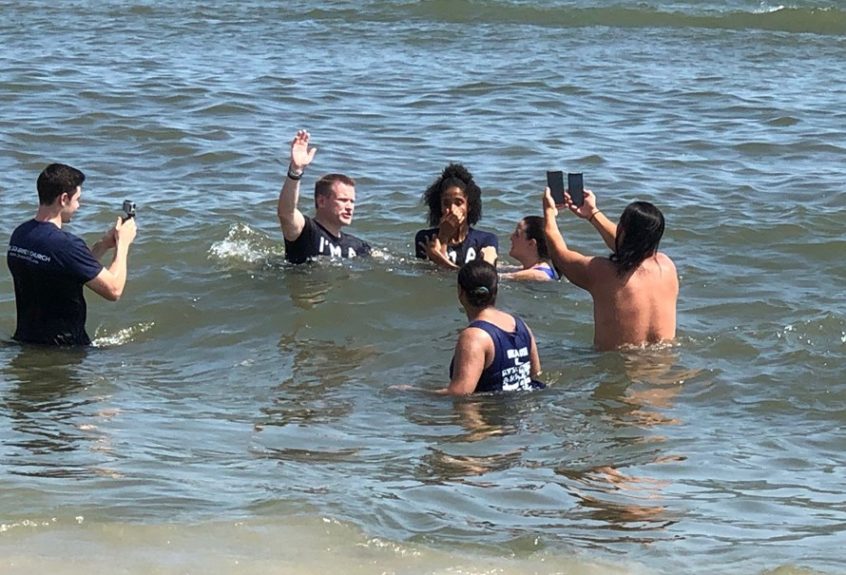 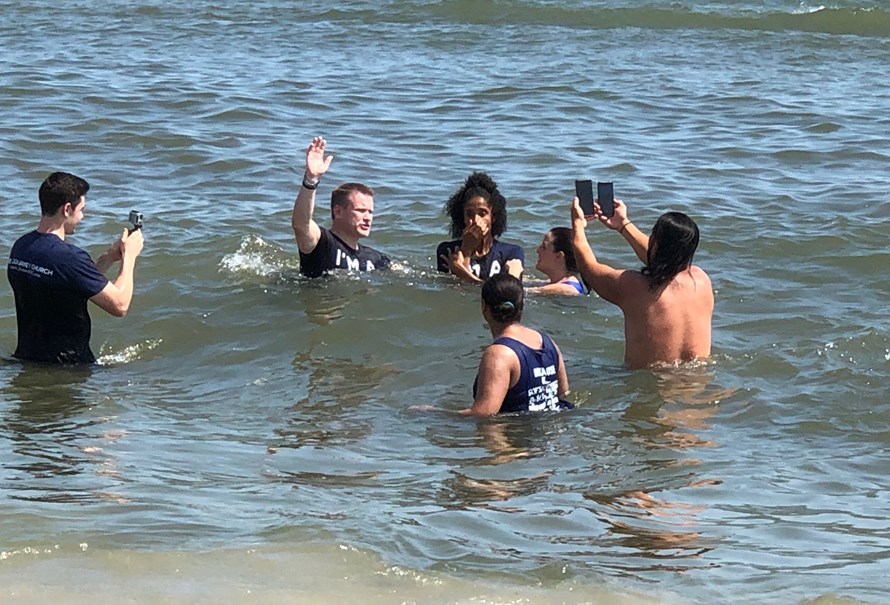 Lead pastor Kerrick Thomas of The Journey Church in Manhattan baptizes a young lady in a beach baptism — one of 51 people giving a public witness for their faith at Jacob Riis Park and Beach in Queens on a Saturday in July. Founded just days after 9/11, The Journey Church has baptized more than 2,750 people in its 18-year history. Photo by Terry Robertson.

Our own Journey Church NYC was featured in the Baptist Press, as part of their series of articles leading up to Sunday, Sept. 8, which is Baptism Sunday in the Southern Baptist Convention.

People crowded onto Jacob Riis Park and Beach in Queens on a hot July afternoon witnessed a rare event for a New York City beach — 51 people showing a public witness for Christ through baptism.

As exciting as that Saturday beach baptism was for The Journey Church, one of the city’s largest Southern Baptist churches, it wasn’t necessarily out of the ordinary.

The Journey is on pace toward 140 baptisms this year — close to the church’s average over its 18-year history. Since its founding in the days following 9/11, the church has baptized more than 2,750 people. On a typical weekend the church draws 1,000 people for worship in three Manhattan locations.

Kerrick Thomas, The Journey’s lead pastor, said the baptism totals stem from a longtime emphasis on outreach and engaging people who don’t know Christ with the Gospel.

“New York City is one of the most unreached cities in America,” Thomas said. “We see reaching people who do not have a relationship with Christ in this city as our primary mission field. We’re very focused on evangelism training and equipping our people to talk about their faith with their friends and coworkers.”

Lead pastor Kerrick Thomas (front center) of The Journey Church celebrates with 51 people who were baptized at Jacob Riis Park and Beach in Queens in July.

Reaching people in New York City isn’t easy. The biggest challenge The Journey faces when trying to engage people with the Gospel is busyness, Thomas noted. Whereas some people have the idea that New Yorkers are rude, he said they can be some of the nicest people you will ever meet. They just don’t often have the time to give you their attention.

The Journey Church uses a variety of tools to train its members to share their faith and invite people to worship services. Its primary tool is “The Difference Maker,” a book written by the its founding pastor, Nelson Searcy. They also host evangelism training events three to four times a year.

“We will even have them write out their salvation stories so they can in turn tell it to a friend in three to four minutes,” Thomas said. “Then we’ll share with them how to share their faith with several different methods, whether it’s one-verse evangelism or some other method.”

The Journey’s pastors regularly teach a sermon series on evangelism and its importance in the lives of believers, such as a series this September titled “Go,” focusing on the Great Commission.

In addition, The Journey has made servant evangelism a significant part of its outreach, with a goal of showing God’s love in a practical way to 500,000 New Yorkers in 2019. They’ll often work with mission teams on projects like handing out granola bars and invitations to worship to businesspeople on Manhattan’s streets.

Terry Robertson, executive director of the New York Baptist Convention, believes one factor that makes The Journey Church so effective in reaching people is that Thomas and his wife Lori have been at the church for its entire 18-year history. Thomas’ years of experience, Robertson believes, has moved him to a point of great fruitfulness in Manhattan.

But Robertson also noted that Thomas is particularly clear when it comes to communicating the Gospel and asking for a decision. Noting the July baptism celebration, which Robertson attended, many of those baptized came to the beach that day planning to get baptized, but some may have made their profession of faith at the beach.

Pastor Alberto Camacho, president of the New York Baptist Convention, baptizes Erlyn Logmoao in the Delaware River — one of five people baptized by The Rock Church of West Haverstraw, N.Y., in August.

“[Thomas] is in New York City of all places, and he has no hesitancy in calling on people to make a personal commitment to Jesus and a public confession of that through baptism,” Robertson said.

“What I find today is that some of the younger guys don’t feel that great of an importance in calling people through an invitation to make such a commitment. What I observed of Kerrick that day on the beach was he was presenting the Gospel, and after he presented the Gospel, he called for people who had not yet done so to receive Jesus, and then he baptized 51 people that day.”

It’s not just larger churches that have stories to tell about baptism in New York, Robertson added, pointing to The Rock Church in West Haverstraw, which is about an hour north of New York City.

Alberto Camacho, the current president of the New York convention, replanted the church in 2015. Although the multicultural church averages around 45 people in attendance, they recently celebrated five baptisms at a service on the Delaware River, which is on the New York-Pennsylvania border.

Of the five people who were baptized, three were family members Camacho stayed with as he relocated from Hawaii to New York in 2015. The ages of those baptized ranged from 7 to 87.

“When I think of our entire territory, roughly 500 miles east and west and 500 miles north and south, we have a vast array of people,” Robertson said. “We have a prime mission field where people are open to the Gospel. With regularity, we’re seeing people come to faith and follow through in baptism.”

Today’s guest post is brought to us by Tobin Perry for Baptist News.