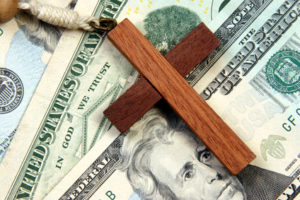 A new first-of-its-kind study has taken an empirical look at the true “value” of faith, and found that religion is worth $1.2 trillion to the US economy, more than the worth of technology giants Apple and Microsoft combined.

The Interdisciplinary Journal of Research on Religion has released the study, made by Georgetown University’s Brian Grim and Newseum Institute’s Melissa Grim, which includes the value of services produced by religious organisations, and the impact religion has had on several top American businesses.

Religion is a $378 billion to $4.8 trillion boost to the US economy, the Grims found. At the high end, religion makes roughly the same amount as a third of the United States GDP.

The authors concluded: “Religion is a highly significant sector of the American economy. It provides purpose-driven institutional and economic contributions to health, education, social cohesion, social services, media, food and business itself.”

“Perhaps most significantly, religion helps set Americans free to do good by harnessing the power of millions of volunteers from nearly 345,000 diverse congregations present in every corner of the country’s urban and rural landscape”, they concluded.